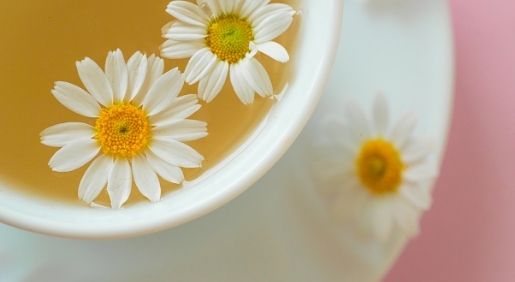 Camomile is an herbal plant of the Asteraceae family with small daisy-like flowers. The name camomile is derived from the Greek word chamaeleon and means ground or crushed apple. Once mature, the flowers are harvested and dried to make camomile tea.

Tea Versus Tisane Versus Botanical Infusions

Not many tea drinkers realize they aren’t drinking tea at all. Tea encompasses all beverages made from steeping dried plants, but not all dried plants make tea!

As an example, camomile is an herbal tea commonly referred to as a tisane. True teas are made from green tea, black tea, and others such as oolong. Tisanes are herbal teas that are caffeine-free and sometimes known as herbal or botanical infusions. Tisanes are categorized by what part of the plant is used to make tea.

Often, herbal teas served either hot or cold are combined to create an assortment of flavored botanical infusions. The herbs combined are paired and typically have a similar flavor.

Origin and Uses of Camomile Tea

Camomile originated from ancient Egypt and is known as a favorite tea of Egyptian people. Old-world Romans used camomile not only for tea but as incense. Both cultures favored this herb and used it in creams, salves, soaps, and more. Although this aromatic herb is grown around-the-world, Egypt and Europe supply most of the camomile sold globally.

Camomile has several varieties. The majority of camomile tea is made from either German or Roman camomile. There are slight differences between the flavors of each plant, but most of today’s available tea is Roman. Both herbs have similar flowers, but German camomile is an annual plant that dies at the end of each growing season. This makes it harder to find. Roman camomile is a perennial plant and comes back each year.

Other uses for camomile are as a beer additive, liquor infusion, and to make wine. Greeks use camomile in their cuisine and this versatile herb is a great flavor for ice cream, syrups, and savory soups.

How to Brew Camomile Tea

A cup of camomile tea is perfect for unwinding from a long day. Tea drinkers enjoy it as an afternoon hot beverage for its flavor. When making tea with camomile, the water temperature should be 200 degrees Fahrenheit, which is close to boiling.

It’s not recommended to boil water for tea. The higher heat can scorch the dried leaves and cause a bitter taste. Steep your tea for three to five minutes, longer if you prefer it strong. Add some honey or another sweetener or leave it plain and enjoy.