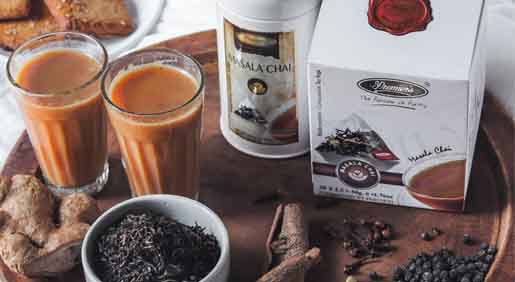 Masala chai tea is a type of black tea. It has its roots in India, where the name means “spiced tea.” If you’ve even had a whiff of masala chai before, then you’ll know it’s aptly named, as it is bursting with spices.

Tea experts aren’t 100% sure how masala chai tea came about, but there are plenty of stories about its origins. Some place masala chai’s creation at over 9,000 years ago, while others have a more conservative number of 5,000 years.

In any case, masala chai played a huge role in Indian society. It’s rumoured to have been created by the king as an Ayurvedic drink, which meant it was used for its healing properties.

The early masala chai tea isn’t the one we know today. In fact, it didn’t have tea leaves at all! Instead, it only consisted of a mix of spices, including:

People prepared it in a variety of ways, plus they drank it either hot or cold for various health reasons.

The Addition of Black Tea Leaves

As you may already know, the British Empire took over the world, starting in the 1700s. They especially had a presence in India in the 1800s.

Naturally, they brought their tea leaves with them, which meant they set up tea farms in Assam as well. Because of this, black tea started appearing in local chai tea recipes.

To make the chai tea more palatable, the British added things like milk and sugar. However, this never caught on with the locals, which meant chai tea was more of an export than a locally-consumed tea. Plus, the price of masala chai tea was too expensive for locals in Assam anyway.

Chai tea’s initial lack of popularity with locals might shock you, considering today, this blend is extremely popular with Indians. However, this all changed in the 1900s.

A Rise in Demand for Masala Chai From Locals

Wanting to capitalise on their product, the British sought to make chai tea popular in India. Their efforts paid off, as the love for masala chai quickly grew within the country.

Furthermore, in 1960, tea production became more mechanized. As a result, the once expensive black tea became affordable to the masses.

Chai tea is a huge part of Indian culture today. Wherever you go, you’ll see street vendors who serve this tasty tea. In addition, Indians will typically greet you with a cup of chai whenever you go visit them.

Masala chai is a central part of daily life as well. It’s not uncommon to see Indians who drink it all throughout the day. In fact, many have it with some afternoon snacks as a daily ritual.

This tea is also very popular across the world. Because of this, there are small twists that different regions have put on it.

For instance, the original Indian masala chai is made of CTC (crush, tear, curl) tea. But in the United States, they use loose leaf tea instead. And in Kashmir, they use gunpowder green tea in place of Assam black tea.

In addition, the milk/cream used differs by region as well. In India, they use whole milk. However, people have gotten creative and use anything from soymilk to ice cream to create the milkiness in masala chai tea.

Now you know a little bit about the history of masala chai tea. Next, we’ll show you all the chai tea benefits you can get from drinking it.

It Gives You a Little Boost

As you know, masala chai has black tea leaves in it. Black tea may not have as much caffeine as coffee, but this can be good for people who are sensitive to it. You can expect each cup to have around 25 mg of caffeine.

This is just enough to give you a small boost without things like shakiness and a faster heart rate.

It Can Boost Your Immune System

What’s great about spices is they don’t just add flavour to food and beverages. They can also provide a bunch of health benefits.

For example, the cinnamon and clove you find in masala can boost your immune system. This helps you fight off illnesses and infections, so you’ll feel healthier.

It Can Help With Inflammation

Another health benefit many of these spices have is anti-inflammatory properties. Cloves and ginger are two of the main ones. So if you have aching joints or painful cramps, then sipping on a cup of masala chai tea can be beneficial.

It certainly is worth a try. The worst that can happen is that you’ve had a warm cuppa that’s pleasing to your tastebuds.

It Can Help With Nausea

Ginger is a powerful root that has so many wonderful properties. As you can see from above, it can help reduce inflammation.

In addition, it’s known as a great herb for gastrointestinal (GI) problems. More specifically, people have been taking ginger tea as a remedy to nausea and vomiting for centuries now.

For some, ginger tea can be too strong for them and offputting. If you’re one of these people, then masala chai can be a fantastic alternative. It’s a more palatable tea and you can still reap the benefits of ginger’s anti-nausea powers.

It Can Help With Digestion

Are you always having issues after you eat? Then it can be frustrating and keep you from really enjoying your meals.

Masala chai tea can actually help you in this regard too. The spices in the tea work together to help your GI tract make more digestive enzymes. As a result, it’ll help you digest your food better and reduce any unpleasant issues you might have after eating.

It Can Help Prevent Cancer

Of course, it won’t completely prevent cancer from happening, but masala chai can decrease your chances of getting it. This is because the cinnamon, ginger, and cardamom in the tea all have cancer-preventing powers.

It Can Help With Your Heart Health

No matter which country you look at, heart disease is a top killer. So if you’re trying to be proactive about protecting your cardiovascular health, then masala tea benefits this too.

One of the spices used in masala chai is cinnamon. Studies have shown that this spice is very promising in the use of lowering high blood pressure. It may also help lower bad cholesterol levels, which can also improve your overall heart health.

How to Prepare Masala Chai Tea

After hearing about all the masala chai tea benefits, hasn’t this gotten you curious about how to prepare and drink it? Thankfully, it’s a very easy and simple process. This means you’ll be able to drink chai tea all day, every day, just like in India!

To prepare chai tea, you’ll need either a good masala chai tea in either loose-leaf or teabag form. If you choose the former, you’ll either need to strain the tea leaves out or you’ll need to make your own teabags.

Strain the tea leaves or remove the teabag from the cup. Add your sweetener of choice and slowly pour the hot milk into the cup of chai tea, stirring as you pour.

If you don’t enjoy additives in your tea, you can simply boil a cup of water and steep the chai. Remove after 5 minutes and drink while it’s hot.

After reading this article, you now know all about masala chai tea, including its history, health benefits, and preparation method.

For many, masala chai isn’t for them. For others, it’s an acquired taste. And for the rest, it’s simply a tea they can’t live without.

Aren’t you curious about how you’d find this tea? Then it’s about time you give masala chai a try. No matter what you think of it, it’s sure to change your life forever.

Are you interested in trying out this delicious tea? Then take a look at our selection now!

×
We use cookies on our website to give you the most relevant experience by remembering your preferences and repeat visits. By clicking “Accept All”, you consent to the use of ALL the cookies. However, you may visit "Cookie Settings" to provide a controlled consent.
Cookie SettingsAccept All
Manage consent

This website uses cookies to improve your experience while you navigate through the website. Out of these, the cookies that are categorized as necessary are stored on your browser as they are essential for the working of basic functionalities of the website. We also use third-party cookies that help us analyze and understand how you use this website. These cookies will be stored in your browser only with your consent. You also have the option to opt-out of these cookies. But opting out of some of these cookies may affect your browsing experience.
Necessary Always Enabled
Necessary cookies are absolutely essential for the website to function properly. This category only includes cookies that ensures basic functionalities and security features of the website. These cookies do not store any personal information.
Non-necessary
Any cookies that may not be particularly necessary for the website to function and is used specifically to collect user personal data via analytics, ads, other embedded contents are termed as non-necessary cookies. It is mandatory to procure user consent prior to running these cookies on your website.
SAVE & ACCEPT
All search results
wpDiscuz
0
0
Your Cart
Your cart is emptyReturn to Shop
Continue Shopping